What is a Virtual Server?

How Is A Virtual Server Advantageous Over Physical Server?

The idea behind adopting the virtualization technology is the price-effectiveness. Since these servers are low-cost, more and more  organizations opt for virtual server hosting these days

How Do Virtual Servers Work?

A virtual hosting  server eliminates the need for a separate computer for each server, and hence it comes as a budget-friendly deal. Virtualization remains a win-win situation for both parties. By using a virtual server, the performance doesn’t get compromised even if it charges fewer bucks.

With the virtual-machine technology, a high-powered server can be divided into many virtual private servers. Every server has its own partition of resources that lets every user run their own operating system and applications. The amount of RAM and resources are provided as per the client’s requirement, plus there are always backups available, so if one virtual server fails, the other one can be brought to use.

To get started with server virtualization, avail the following: 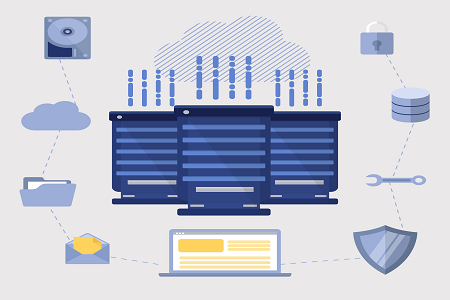 First, you need to get the server itself that would let you run various CPUs with specific memory or resources. The more you invest, the stronger server configuration you get. All kinds of servers are available in the market, from cheap ones to expensive kind; the one you choose should determine your organization’s requirements overall.

Next, you need a host computer with specific hardware requirements. The specifications depend on the number of the computer you would run on that single computer. Generally, it is recommended that you do not run more than four virtual machines on one computer to prevent it from a slow operation. You can have IT support providers who provide virtualization services.

RAM is an important factor that would be responsible for running all the applications on your client’s computer smoothly. So you need to allocate a specific RAM amount to each of the virtual machines. Generally, you should allocate around 3.6 GB of RAM for each virtual machine running on one host computer.

It is recommended to have various guest operating systems since each virtual machine needs its own unique software installation. Such as, you can have one OS for Linux and another OS for Windows. This would be a beneficial approach for your different clients that need to run different applications. In case when their application doesn’t support one specific OS, they can make use of another one.

Once you have all these devices ready, it is time to run the new virtual machine. Here is how:

• You should first get rid of all the unnecessary services. The fewer CPU resources you use on the host, the more the virtual machines would run smoothly.

• Obtain your VM software, download the package, and run the installer. Once the program has been installed, you may get a prompt to restart the system. Restart the computer and register the software with the given serial number.

• Create the first virtual machine with the operating system that best suits you. You can also rename this configuration. For the networking mode, choose Bridged networking and click Next.

• This will create a virtual disk file that would go on the host computer. You can allocate 4 GB RAM to the virtual disk and increase later if the need arises.

• Now create the Windows Server 2003 virtual machine and select the Custom option that would bring you some more options than previously. This time when the Server asks how much memory to allocate, make sure you allocate at least 256 MB. For the networking type, choose Bridged, as before.

• Once the configurations are complete, you should now install the server software. Place the CD and choose the OS, follow the options and make appropriate selections; it would be almost similar to a real PC configuration.

• When the process is done, provide input to the VM by clicking inside the window. You can press CTRL ALT to free up the controls. The same process follows for every OS installation, and this is how you do the configuration for the virtualization.

Reduce your IT Overhead with Server Virtualization

There are many reasons why organizations prefer virtualization over a physical server. Let’s have an idea here-

Energy costs are the main part of the expenditure when it comes to an IT organization. Virtual machines reduce overall costing significantly by letting different computers run from one single computer. In a lack of virtualization, the energy expenditure is much higher since one computer is responsible for running one machine only.

Office space is another factor that contributes to the overall budget of an organization. By using the power of virtualization, it is possible to cut down the number of total host computers since once computer can be used by four virtual servers. When we apply this formula to a big company that runs provides virtualization at a significant level, it will cut down much space that would result in significant cost reduction.

In a large organization, installing the operating system in all the machines specifically is a troublesome and time-consuming task. Also, if any problem happens with all the devices, it needs undivided attention for each machine. From a business’s point of view, it won’t be wise to waste time installing OS spritely. Hence, virtualization eliminates the time-consuming installation, and instead, you can get all the applications and OS installed in just one machine, and that would work for all the connected virtual servers.

When you go virtual, it means you don’t have to spend on the physical devices anymore. With one physical server, you can connect up to four virtual servers, and that means the overall number of total physical servers will be reduced drastically. This, as a result, would save you cost significantly that you can use on other important areas of your business. Additionally, the maintenance need and costs also get eliminated when you don’t have many physical servers in the first place.

With virtualization, you won’t need to purchase software licensing for each device separately. Instead, there are virtual licensing packages available that are particularly designed for virtual hosting servers. This brings competitive price reduction, which would make a huge difference in overall expenditure.

How Salient IT reduces IT overhead?

Salient IT has been working as a provider for virtualization for years. We help organizations achieving the IT goals strategically with reduced cost and dynamic IT infrastructure via virtualization. Improve your processes and let your clients experience the superiority of automation with a virtual server facility provided by Salient IT.