Over the last decade or so, the business case for VoIP has been growing stronger and stronger. Not only do you get excellent calling rates, but you also get the option to add the sort of functionality which was once only available to enterprises. If you’re thinking about making the switch to VoIP, here’s what you need to know about implementing a VoIP service in Lodi.

Be prepared to spend money before you save money

The main reason why VoIP took so long to be adopted by businesses was that it has spent most of its existence being notorious for call-quality issues. To be fair, these had nothing to do with VoIP itself. They were essentially a reflection of the state of the internet and, in particular, the fact that users often had to make do with connection speeds which, these days, would be considered unacceptable even for mobile devices.

Now consumers and businesses alike can have internet connections which are easily fast enough for VoIP, especially if you’re happy to stick with audio (i.e. pass on video-calling at least as standard). These connections do, however, come at a price, particularly in the business world, where traffic volumes are likely to be significantly higher than they are in private households.

For completeness, you can probably trim your raw bandwidth requirements by using what you have astutely. In particular, you want to have a clear and effective approach to prioritizing network traffic. VoIP traffic should usually be your very top priority.

Businesses are also going to have to purchase equipment in multiples, for example, one headset or VoIP handset per user. Although these purchases are generally very affordable, especially with volume discounts, they do have to be taken into consideration.

Assuming you’re only implementing VoIP for audio, then you’re aiming for connection speeds of 0.1Mbps or better. That’s upstream and downstream. If you have an asynchronous connection, e.g. DSL, then you need to check both speeds separately as the quoted maximum speed is usually the downstream speed. This can be significantly faster than the upstream speed. You should be aiming to hit these standards without going over 80% of your maximum bandwidth. This will give you a bit of breathing space if you need it.

The key point, however, is that you should be reaching these speeds effortlessly, or, in more practical terms, without straining your network infrastructure. You should have minimal latency, jitter, and packet loss. These are the three main culprits behind VoIP call-quality issues and they can almost invariably be traced back to inadequate hardware. For completeness, they can also be caused by firewall-configuration issues. Basically, you need to make sure that your firewall recognizes your VoIP client as a trusted application. 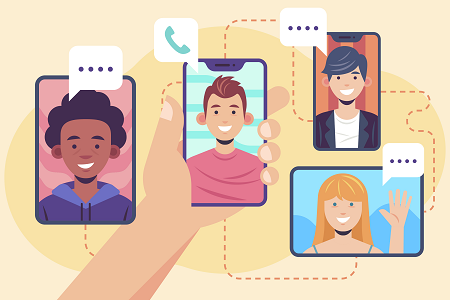 If you’re thinking about video-calling then you’ll need at least triple this speed to use a basic webcam, five times would be better. If you’d like full-on HD video, then you need, literally, more than 10 times this speed (1.2Mbps per line). It isn’t necessarily a bad idea to implement the capability to use video, but it’s often best to make video-calls the exception rather than the rule and to schedule them at times when your network is at its quietest.

When choosing a VoIP service vendor, prioritize quality and security over cost

In theory, you can implement VoIP using a variety of protocols. In practice, you’d probably find it very difficult to find a VoIP service vendor who used anything other than SIP (Session Initiation Protocol). The job of a VoIP protocol is to get the VoIP data packets from A to B regardless of whether they’re going to the same VoIP network, a different VoIP network, a landline phone network or a cellular network, regardless of how many people are on a call and regardless of where in the world they are.

Consumer-facing VoIP services tend to use “least-cost routing”. This is exactly what the name suggests. The protocol will look for the cheapest available carrier and route it through them without worrying about whether or not this provides a high-quality user experience. Some business-facing VoIP service vendors also operate on this approach – and they are generally best avoided. In short, for businesses, compromising on call quality usually turns out to be an expensive mistake.

On a similar note, business users need the highest possible levels of security. In addition to protecting the data itself, user accesses need to be protected against misuse (accidental or deliberate) and compromise.