These days, there are probably very few SMBs that are still backing up their data to physical storage. Even if you’re still running a data center (which is increasingly unlikely), you’re probably using the cloud for your off-site data backup storage. While online data backup does work along much the same lines as traditional data backup, there are some differences and it’s helpful to be aware of them. With that in mind, here is a quick guide to what you need to know about online data backup services in Davis.

Even if you’re in the public cloud, you should organize your own online data backups

If you’re in a data center or a private cloud, you have full responsibility for your own systems and hence you have full responsibility for ensuring that your data is appropriately backed up. That typically means having two data backups, one kept on-site/in your main cloud and the other off-site, be it in a physical storage location or a (second) cloud.

If, however, you’re in the public cloud, then there’s a good chance that your public cloud vendor will automatically back up your data to your local platform. This can be very convenient, but it’s not sufficient. First of all, it does not offer you any protection from data being erroneously (or maliciously) deleted by someone misusing one of your accesses to that platform. Secondly, it does not offer you any protection from the prospect of your main cloud provider having an outage. This may be unlikely but there is a big difference between unlikely and impossible.

You need clear oversight of where your data is being held

The online world may be without frontiers, but in the real world, national borders matter, in fact, internal borders (such as state borders) also matter, perhaps more than you might initially think. In the real world, legislators and regulators place obligations and restrictions on data owners such as SMBs and those obligations and restrictions are backed by sanctions. It is becoming increasingly common for lawmakers to restrict where, in the world, their citizens’ data can be held and to back those restrictions with onerous sanctions (think GDPR).

This means that data owners, regardless of their size, must be clear about where any sensitive data is being held and it is very much recommended to have clarity over where all of your data is being held. Even if it’s not officially defined as sensitive, you’re keeping it for a reason and you’d likely prefer it to be kept confidential.

For these reasons, you need to be very careful about your vendor selection and you also need to ensure that the service contract governing your relationship is complete, robust and enforceable in practice, otherwise, it has no value. Enforcing a contract is easiest when the other party is located in the same legal jurisdiction as you. It, therefore, makes sense to look for online data backup service providers which are actually in Davis (or at least near Davis), as opposed to online data backup service providers that offer services in Davis, but which are actually located elsewhere. 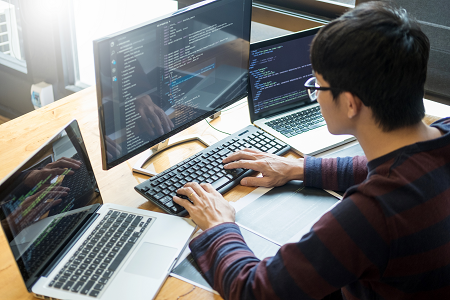 You can keep sensitive data in a public cloud

Despite everything which has been said so far, it is often perfectly feasible to keep sensitive data in a public cloud, as long as you know your provider. The mainstream cloud providers tend to be based in the U.S. but they are increasingly likely to be set up not just to comply with U.S. laws and compliance programs (such as HIPAA), but also the main laws and compliance programs from across the world from PCI/DSS to GDPR.

If you wanted to use the public cloud as a storage location for online data backups, you would usually encrypt the data on your own servers and keep it encrypted until it was either used or deleted. To use the data, you would either transmit it to a private cloud (your main one or a secondary cloud used for disaster recovery purposes) and decrypt it there or just decrypt it in the public cloud and work with it there until your regular system is back online.